8 Keys – Should you get involved with Stellar Lumens? 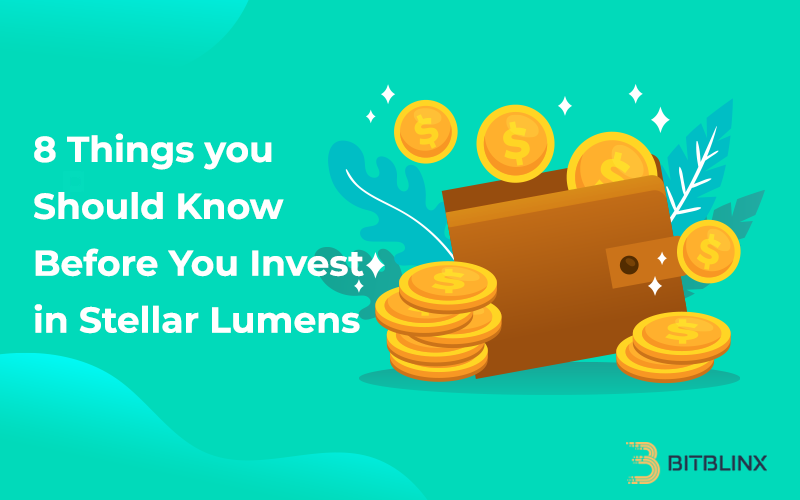 8 Keys – Should you get involved with Stellar Lumens?

Stellar Lumens or XLM is a cryptocurrency that does not need much introduction given that its use-case is a “no brainer”. It has largely been a low profile digital currency but the major reason XLM is such a big deal these days is how compelling its value proposition to the crypto community is.

Until you understand what a cross-border remittance is, appreciating the use case of cryptocurrencies like XRP and XLM, may not be easy. And why should you even bother investing in an asset whose use you don’t understand? So, before you attempt to question the investment potential of this coin, here’s a brief explanation first, to enlighten you on the kind of problem XLM is generally trying to solve.

What problem does XLM attempt to solve?

Most third world countries largely rely on income from remittances to fund national development. In Nepal for example, a country of about 29 million people, remittances account for 31.2% of the GDP and 10% of its population are migrants working abroad in the Middle East and other parts of the world. Most of these people are however finding it expensive to send money back to their homes. Due to the inefficient centralized financial systems currently operating in the cross-border remittance space.

In a survey conducted in 2015 by McKinsey & Company on cross-border payment systems, traditionally routed through the SWIFT inter-banking protocol, it was discovered that the average fee paid on top of the foreign-exchange spread, in order to send a single payment overseas, ranges between €20 and €60.

And that transaction takes, on average, about three to five working days to reach the intended recipient. It was also found that during this process it is difficult for senders and receivers to track their payments while the payment is in transit. This further creates uncertainty about both times of delivery and the final payment amount.

Also, despite their best intentions, financial networks like SWIFT are technically and geographically limited in outreach. In fact, they are not as widespread and technologically accessible to the intended beneficiaries of these remittances, as they ought to be. This scenario further widens the financial gap between the have and have-nots, the rich and poor, the developed and less privileged communities in society.

Now, what if these limitations could be eliminated by the speed and efficiency of blockchain technology? This is the question that acted as the basis for the creation of Stellar. Stellar was created to make the global financial network cheaper, quicker, reliable and more inclusive.

However, there are many other technological solutions deployed out there, in response to this problem. For example, R3 CEV, VISA, Facebook (Libra), JP Morgan (JPM coin), Ripple (XRP) and SWIFT GPI (an improved version of SWIFT), all provide identical solutions to Stellar’s value proposition. In fact, if you dig deeper, you will find that Stellar has been considered to be one of the closest rivals to Ripple and Ethereum. So what makes Stellar XLM stand out of the pack?

8 things that make Stellar (XLM) different from other tech-solutions out there?

1. Stellar is a secure network, powered by the Lumens, its native token.

In the same way, Ether (ETH) is usually called “Ethereum” and XRP called Ripple, so are the terms Lumens, XLM and Stellar interchangeably used to mean the same thing. Most times the name of the token is confused with the ticker symbol and platform. Stellar’s native coins were originally called Stellars but a rebranding of the network in 2015 led to a better distinction between Stella Development Foundation (SDF ) – the non-profit organization behind Stellar, Stellar – the Network, and the Lumen – its native token. The native token on the Stellar platform is called “Stellar Lumens” or just “Lumens”, and its ticker symbol is XLM.

Lumens power and secure the Stellar network and all of its operations in basically two ways:

How does this really help you?

By using the Stellar platform, however, Bob can simply send money from his Bank in USD to Stellar’s Bank account and Stellar will take care of the conversion. Basically, his USD will be transferred out of his bank account and into the Stellar platform where it’ll be converted into Lumens (XLM) first. Stellar’s inbuilt protocol will then identify the best XLM-to-AUD exchange rate at that time and process the transfer immediately. The money will then be deposited in AUD into Alice’s bank account.

And all this cross-border transaction between Alice and Bob happens in a matter of seconds at a ridiculously low fee.

2. Mining is not required on Stellar to generate new Lumens and validate transactions.

Stellar is different from other cryptocurrency platforms. This is because it does not rely on mining algorithms to generate new lumens or to validate transactions but it uses it a different protocol. All the total number of XLM tokens that will ever be used in Stellar’s ecosystem, already exist. Stellar instead uses its own unique consensus protocol. It is called the Stellar Consensus Protocol (SCP) that is based on the Federated Byzantine Agreement (FBA). This is a technique used in digital systems to approve network transactions.

In other words, Servers on the Stellar network that run the SCP interact with one another to validate transactions without requiring any mining power. That makes the system more energy-efficient and allows it to have faster transactions.

3. The Stellar platform is decentralized and financially inclusive to the general public

Stellar Development foundation is a non-for-profit project aiming to spearhead the improvement and adoption of Stellar. It has since inception made the Stellar software and codebase open source. Meaning anyone all over the world can access, modify and participate in improving the network. In addition, the Stellar Consensus Protocol (SCP) permits anyone interested in joining the network as a validator to connect their systems to Stellar.

For example, Oradian, a Croatian banking software provider in Nigeria integrated the Stellar platform into its software, Instafin, to facilitate low-cost speedy money transfers for more than 200 microfinance institutions (MFIs). 90% of the more than 300,000 customers accessing this service are women in rural areas across Nigeria.

In March 2019, IBM announced that it had partnered with stellar to develop WorldWire. It is a fast and cheap cross-border money transfer technology. Thay day, the price per lumen rose by 7.3%. The price surge was attributed to the improved investor perception Stellar gained from the positive publicity it got from this strategic partnership. Through this relationship, more international banking institutions such as Banco Bradesco from Brazil, Bank Busan of South Korea and Rizal Commercial Banking Corporation (RCBC) from the Philippines, have been on-boarded onto this Stellar-powered payment platform.

Stellar is privileged enough to have an honourable crypto developer as its founder. The Stellar Development Foundation (SDF) which came into existence in 2014 was co-founded by Joyce Kim a former attorney at Sherman-Sterling and Jeb McCaleb the founder of Ripple XRP. Before creating Ripple and Stellar, Jeb had created Mt Gox, an exchange that had at one point managed 70% of the world’s bitcoin transactions.

Denelle Dixon a former CEO at Mozilla and former Senior Legal Advisor at Yahoo Inc, is currently the SDF’s Chief Executive Officer and according to Craft, the SDF currently has about 129 employees.

With Blockchain technology, it is now possible to write a set of commands or contracts and store them on the Blockchain. What is interesting is that, when these contracts or instructions are programmed further to execute themselves when certain parameters are fulfilled, then it is said that they are “smart”. Smart contracts have several use cases but they are, for instance, used by ICO projects on Blockchains such as Ethereum. These are used to release tokens into circulation as a way of raising funds from the public, for their projects.

Ethereum has in the past risen to become one of the most used Blockchain networks for hosting Smart contracts and DApps. Primarily due to its versatile and Turing-Complete programming Language called Solidity. However, there are other Blockchains that can more efficiently run less complex Smart contracts. Stellar is one of them. It is not just a payment network, its also capable of hosting smart contracts. In fact, since a developer doesn’t have to possess Solidity- programming language skills to be able to develop a Smart contract on Stellar,  launching applications on it is much easier and faster.

Mobius Network, one of the most successful ICO projects ever developed and launched on Stellar, successfully raised $39 million in 24 hours between the 18th and 19th of January 2018. With an initial token price of $0.16 USD per MOBI (Mobius’ token), it reached an all-time high of $0.45.

While commenting on why Mobius Network opted to run its project on Stellar instead of Ethereum, its CEO – David Gobaud said that “We realized there was no way that Ethereum could handle our technology. It was too slow, too expensive and too insecure”. This comment reveals the growing demand within the crypto community for faster and cheaper Blockchain alternatives like Stellar.

7. Cost of a transaction on Stellar lumens is almost zero

This makes Stellar a  suitable alternative for individuals that want to send and receive micro(very small) cross-border payments among each other.

A transaction on Stellar can be confirmed within 3-5 seconds. The network can process about 1,000 transactions per second (TPS). In fact, it could even process more transactions when more versatile servers are plugged onto its network. According to Stephen van Coller a Barclays-Bank Africa CEO, while commenting on the implementation of a Real-time payment system powered by Stellar at in their Bank, they found out that Stellar’s system could process 36 million transactions an hour when using Google cloud servers, which translates to around 10,000 TPS.
This gives Stellar a huge advantage, Ripple, Swift, and other cryptocurrencies, when it comes to effecting cross-border money transfers.

Instead of primarily targeting the affluent financial institutions that are already privileged with established financial systems, since its inception, Stellar has always distinguished itself from the pack of blockchain projects by championing a selfless cause of making its platform usable and accessible to the average individual in society.

This promotional approach coupled with Stellar’s robust technology, corporate partnerships, and talented team, puts Stellar in a better position for future mass adoption by the public.

Yes, you are wondering whether you should invest in Stellar Lumen. But what you should really be asking yourself is, “What will happen as the public demand and usage of Stellar increases?”. As public adoption and investor perception improves, it’s not a matter of ‘If’ but it’s a matter of “when” the market cap of the Lumen (XLM) rises, which will consequently boost the price of XLM.

Stellar Lumens (XLM) are currently available on Bitblinx exchange. If you want to buy some XLM today, open your free trading account now.